Rodney Square: The Center of Life in Downtown Wilmington DE 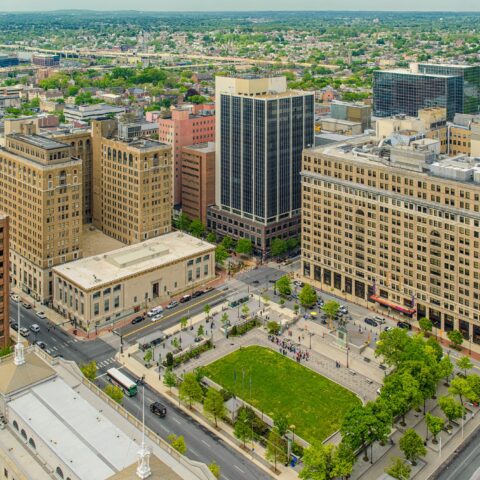 Today’s Rodney Square evolved from a 1 ½ acre parcel of land bounded by West 10th, North Market, West 11th and North King Streets which was assembled from six separate parcels by the Borough of Wilmington between 1825 and 1832.

Wilmington’s first water reservoir was situated in this block from 1827 to 1877. Also located on the site were the Water Department offices, a fire engine house and the City Engineer’s office. Following the relocation of the reservoir to the Cool Spring area, the New Castle County Court House was built in the middle of this parcel, opening in 1881 and remaining until 1919.

During the early 1910s, DuPont Company Vice President Pierre S. duPont and his personal assistant John Jacob Raskob developed a master plan for the Square that would transform the location into the civic center of Wilmington, complete with open space and special features that would unify the entire surrounding area and buildings into a single scheme.

Rodney Square’s design was influenced by the “City Beautiful Movement,” an urban planning movement led by architects, landscape architects and civic reformers at the turn of the 20th century to improve social order by introducing more beauty in the urban landscape, thereby encouraging civic pride and engagement.

Construction of the Square(then called Rodney Square Park) began in 1915 and was completed in 1921. The defining symbol of the Square, the equestrian statue of Caesar Rodney created by James E. Kelly, was dedicated on July 4, 1923. The statue commemorates Rodney’s ride from Dover to Philadelphia on July 1-2, 1776 to cast the deciding vote in the Continental Congress for independence from England.

Wilmington’s tallest building and the anchor building of the Square, the Dupont Building, began construction in 1907 as a 12-story office building in the Italian Renaissance style. Multiple phases of construction continued between 1911 and 1931. Its design influenced the style of the other buildings facing the Square:

Rodney Square and its four surrounding buildings (along with the Caesar Rodney statue and the Nemours Building) were all placed on the National Register of Historic Places in November 2011.

As it approaches its 100th birthday, Rodney Square continues to serve as the premier public space in downtown Wilmington, enriching public life as a neighborhood park for the whole city and venue for annual community events like the Downtown Farmer’s Market and Clifford Brown Jazz Festival.

Rodney Square Works is a multi-phased public-private project led by the Rodney Square Conservancy (RSC) that involves a $6 to $8 million dollar renovation of Wilmington’s iconic public space in the heart of the city. Learn more about the project by visiting rodneysquare.org.

The Dupont Building: A City Within Four Walls

In Local Hands: A Personal Note From Rob & Chris Buccini on 101 dupont place